It all started yesterday with this tweet from my friend Carol Flammer: 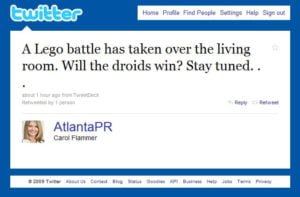 At this exact same moment, I overheard a LEGO® commercial that my daughter was watching say something about “social skills”.  This started me thinking about ways to best explain certain aspects of social media. Bang@*! Pow!#? I was off on a hunt! (Now the mystery of how I come up with blog posts is unraveling…yes?) All of this led me through hours of wonderful research based on LEGO®. It then became an introduction, of sorts, to a book called The Cluetrain Manifesto, which was written in 1999. What a ride!

Little did I know how deep one could go in a search where “LEGO®” and “Social Media” became paired! In all honesty, I attribute my ignorance here to the fact that I was more of an Etch-A-Sketch kid. If not for this I would have surely known all about Jake McKee. Do you know of Jake? He’s the mastermind behind the social media consultancy Ant’s Eye View, who “burrow into your business, becoming an extension of your company while we partner to build social media capabilities into your organization”. He is also the voice at Community Guy, which is a most excellent resource for anyone interested in social media. Jake was the man who helped to build the community development team and social media presence for LEGO®. Is it all starting to come together now?

Jake has much to teach us all about how we build and manage our communities. My original inspiration for this post was LEGO® itself…the little building blocks and what they do for us as a teaching tool while growing up. Before today I’d never heard of Jake McKee. Today I’ve hit the jackpot, all thanks to a tweet about LEGO®! I stumbled upon TWO related articles over on Feeding the Puppy. An excellent interview with Jake himself, and,…get this, a much earlier post with the title “The Social Lego Principles”, which uses LEGO® to explain “how to build something wonderful from the blocks of social media”! I’m cross-eyed at this point y’all.

I then headed over to the LEGO® website, and there, on the page for parents, where they explain the benefits of playing with LEGO®, I was shocked at what I read! Playing with LEGO® can teach us much that is necessary for success in social media! Click through the orange age tabs in the middle of the page to see for yourself.  Apparently, learning with LEGO® never stops! LEGO® hasn’t stopped utilizing social media sans Jake McKee either.  They still embrace and embody what it’s all about.

The video below is almost 45 minutes long. You may want to bookmark this page, finish your pop-tart and head out. That’s fine; I promise it’ll be here later when you have the time. Do make the time though! In the video is Jake McKee, explaining how LEGO® Caught the Cluetrain. “Cluetrain” is a reference to a 1999 book, The Cluetrain Manifesto. This book obviously had an impact on Jake McKee!

Wikipedia explains: “The Cluetrain Manifesto is a set of 95 theses organized and put forward as a manifesto, or call to action, for all businesses operating within what is suggested to be a newly-connected marketplace. The ideas put forward within the manifesto aim to examine the impact of the Internet on both markets (consumers) and organizations. In addition, as both consumers and organizations are able to utilize the Internet and Intranets to establish a previously unavailable level of communication both within and between these two groups, the manifesto suggests that the changes that will be required from organizations as they respond to the new marketplace environment.”

From Doc Searles (one of Cluetrain’s authors) blog:  “the book started as a website, with 95 Theses splashed on a web page, in tribute, homage or just a scandalous rip off of Martin Luther’s famous set of 95 Theses.  If you don’t know about the original, shame on you.  Martin Luther was the renegade priest who started the Protestant Reformation by nailing 95 Theses to the door of a church.  Equally important but often ignored, he translated the bible from Latin to the language of the people (in his case, German) and opened it up for all to read.”

If you haven’t read this book, today is your lucky day, you can Read the entire book online for free. Here now, just to entice you to a great read, are the 95 Theses – from 1999:

Are you as amazed as I am at the relevance of these after 10 years?

This concludes my search for truth and meaning in a set of stackable blocks! If the LEGO® story or The Cluetrain Manifesto tidbits have moved or enlightened you, I’d love to hear about it in the comments. If you have any 10 year old books that are worthy of a mention, or you have any toy company executives as friends…we want to hear about that too!