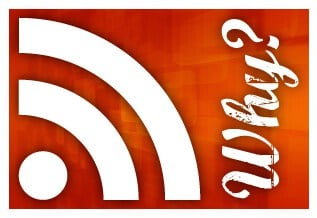 Don’t attempt to read this today without “Take A Chance On Me” by Abba. I stuck it in here to make it convenient for you. You’ll just have to take my word for it…you’ll get more out of the experience!

I like Cheese Grits, and I like opening my RSS feed reader every morning. These were the first two things that came to mind this morning. I mentally compared the two. It turns out that I couldn’t really write all that much about cheese grits, though I would. I hope this at least explains the title…now on to RSS.

I just wanted to let you know that I tried RSS once, and it didn’t hurt me at all. I was like many, and hesitant to actually click upon the little orange icon. Then, one day in a fit of overwhelming curiosity, I gave in. It was late spring, and like any other Tuesday, I sat in the pasture pondering life and what might lie ahead. I’d tried everything else and survived; RSS was the one remaining bale of hay I’d never tried to tote. I ran to the camper and fired up the laptop. (*you can’t be any more surprised that I have DSL in a Coachman camper than the technician was on the day he came to install it. Settle down.)

My life has been simplified and expanded all at the same time since that day.

Anymore, I’m an outspoken advocate everywhere I go. Seriously, and I do catch a little grief over it sometimes! Check out the size of those buttons over there! You don’t think that bothers somebody? I can’t help it though. I’m both the President and only current member of the North Georgia RSS fan club. I have to fly my flag somewhere.

I could go on-and-on today, but I won’t. My intention was to sing about RSS and how simple and un-scary it really is. I still find that folks are still hesitant and confused. I attended a social media talk just last night at The Chamber of Commerce in Blue Ridge, Georgia. It went pretty well, but when we got to the part where the nice man talked a little about RSS…people looked real uncomfortable. It also occurred to me in a comment from yesterday’s post, that it’s just getting harder to keep up with all that’s happening in social media.

I subscribe via RSS to every one of the blogs in my blogroll. No way that I have the time to even glance at all those sites without RSS! With RSS and my Google reader I can scan through them all in minutes, sort the fluff from the fiber, so to speak. I feel plugged in y’all! If you take in a heap of information each day from news sites and/or blogs, and you’ve never used RSS feeds to collect it all into one place, you owe it to yourself to try it out. I’ts simple and it will save you some time each day. For this alone, subscribing via RSS is a beautiful thing.

I want to finish before the song ends. If you’re not fired up about RSS and using it to subscribe someplace (here maybe? I have big buttons!), here’s two more places you should stop in before your mind is settled:

That’s about it. As much as I love cheese grits, RSS wins today. Quite simply, it’s been a better friend to me. Have you done it yet? Has RSS fixed everything in your world? Tell me your story in the comments; otherwise you’ll leave me out here sounding like a blitherin’ idiot all by myself.

Also, if anybody has information about an RSS related clothing company, please fill me in. I’ve been there and done that…but can’t seem to find the t-shirt. Have a great day today!