The Tweeple of Home Depot 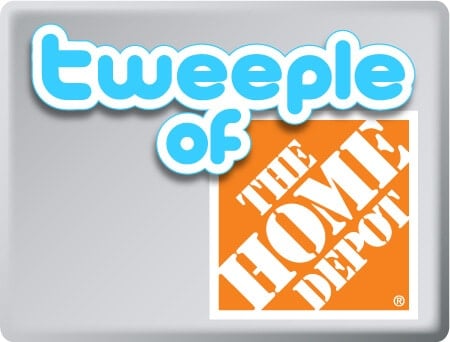 It’s not hard to feel a little intimidated by big brands in social spaces online. As a small business in social and shared spaces like Twitter, I once thought that big brands were untouchable…that they somehow automatically had something that a mere “just me” could never obtain. I did watch and followed along, to be sure, and I read every case study and interview that I could find. My mindset was that I could perhaps catch little bits and pieces of information or tactical insight and perhaps even grow brilliant through osmosis. I truly felt like I couldn’t have what they had or do things the way that they did them.

This informative video is not a short one. Watch now, or bookmark for later.

I always assumed that the people who were in charge of the social media efforts of big brands were somehow more than human. Don’t get me wrong, I have no doubt that the individuals hired to represent big brands are some of the very best  at what they do. Still, whether an individual or a team, these are in many ways more like me than I had dared to imagine.

When Hurricane Gustav touched down, the company decided to stay open for 24 hours to allow customers to stock up. They put the word out through traditional media, but it didn’t have the same effect as a simple tweet from Home Depot’s Twitter handle. The news quickly spread virally, customers streamed in all night and Home Depot got the recognition they deserved for helping their community.” – Ryan Healy from Employee Evolution

I chose Home Depot to talk about today because they are local to me here. So local in fact, that I found myself face-to-face with Sarah Molinari (Corporate Communications Manager for Home Depot) at a Tweetup just the other day. I walked over and introduced myself, and proceeded to tell her that I intended to write an article soon using a video clip with her in it. I should point out that Nick Ayres (Interactive Marketing Manager at Home Depot), also featured in the aforementioned video, could be seen standing just across the room as well. Something about this interaction loosed something in me, something that in prior times was a little less than real to me.

At a Tweetup it is customary to use Twitter handles on nametags…your own “@name”, Sarah was @HomeDepot, and her nametag looked just like mine, same blue bordered sticker, hand written with the same Sharpie pen over on the welcome table. Epiphanies happen, just like that. Within 20 feet of me were Twitter people (Tweeple) that represented CNN, The Georgia Aquarium, Newell Rubbermaid, and many others. A room full of individual, fun, real, and unique people. I also realized that I am in fact taller than @HomeDepot.

I do believe that large brands have an easier time creating communities and conversations around their brand than many small businesses. I attribute much of this to the fact that they are already well known names. However, the brand itself is only part of the social media story. In large part, the success and impact that a big brand experiences on the social web should also be credited to the individual people who drive these representations and presence.

“Tweeting along with customer care reps Michael and Stephanie, Sarah has built the number of followers to 15,000 with folksy video about the arrival of the first Fraser Fir Christmas trees and polls on whether Thanksgiving turkeys are better deep fried, baked or smoked.” – Dave Armon at DNA13.com

I’m still wowed by Home Depot. But now, on Twitter at least, I think of myself as following and interacting with Sarah, Nick, Michael, and Stephanie. Keep that in mind as you listen to what is said in the video here, or as you read the quotes and click the links. In trying to understand what they (or any big brand) are doing with social media and why, I look at the efforts as being driven by their personalities, passions, and love of the brand that reveals much about why Home Depot is successful in their use of social media. I’m learning from people, and I can do that.

“It’s about sharing relevant info and being available when customers need us. That could be when a hurricane is bearing down or when someone’s water heater breaks.” – Sarah Molinari from Mashable’s “40 of the Best Twitter Brands and the People Behind Them“